Joseph and His Technicolour Dream Coat

Ursuline College’s Transition year presented Joseph and the Amazing Technicolor Dreamcoat in the Hawkeswell Theatre on the 18th and 19th April 2018. The Production was directed and choreographed by Hazel McLynn, with Niamh Crowley as musical director. Joseph is an ensemble musical where all the students in Transition Year got a chance to participate equally in the show. This musical depicts the adventures of Joseph with the coat of many colours who is sold as a slave by his eleven brothers into Egypt where he remains exiled. His ability to interpret dreams gives Joseph power and influence, and he is appointed to a post in the Government. The story concludes with the reunification of Joseph with his father and brothers. The story originates from the end of the book of Genesis. Almost every word was sung throughout the whole production.

The stars from this year’s musical were Ellen Given as Joseph, his eleven brothers – Carrie McDaid, Laura Denvir, Caoimhe Buckley, Kristyna Cieslarova, Roisin Martin, Aoife Barrett, Kate Clarke, Daeneara McGowan, Leah Fehrmann, Jenny Demmel and Beibhinn O’ Reilly. There was also his father- Grace Davitt; narrators Ellen Bastible and Lauren Gordon and Potiphar and his wife played by Aoife Smith and Niamh Cusack and all eleven wives. All four groups of Transition Year made up the chorus. The girls put months of practice into their production, and it was wonderful to see the students grow in confidence and artistic ability as the practices progressed.

There were big audiences on both nights and the audience were enthralled and engaged throughout the whole evening. A very heartfelt thank you to Hazel and Niamh for all their hard work, the staff especially Ms. Lee (Transition Year Co-ordinator) and all the musicians who helped make the musical such a successful production and a wonderful experience for the Transition Years. 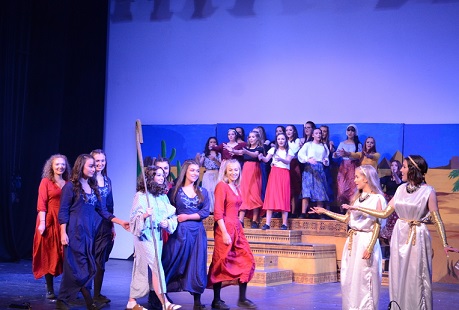 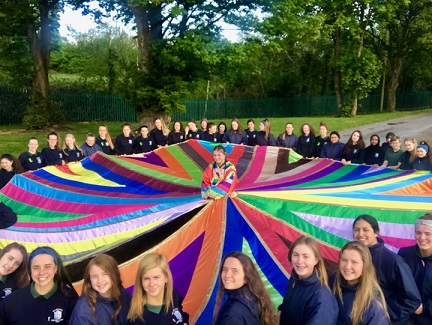 This website uses cookies to improve your experience while you navigate through the website. Out of these, the cookies that are categorized as necessary are stored on your browser as they are essential for the working of basic functionalities of the website. We also use third-party cookies that help us analyze and understand how you use this website. These cookies will be stored in your browser only with your consent. You also have the option to opt-out of these cookies. But opting out of some of these cookies may affect your browsing experience.
Necessary Always Enabled

We use Google Analytics to help us see how our website is been used -these cookies include _ga, _gid and _gat. We also have an instagram feed on our site which sets the following cookies: rur, urlgen and mid to help show images correctly and securely. We use YouTube which sets the cookie VISITOR_INFO1_LIVE used to track the information of the embedded YouTube videos on a website.